Los Master Plus in DC

They're baaaaaaack! With opening DJ set by the space cumbia maestro G-Flux! The dynamic showman duo 'Los Master Plus' had their first gig in hometown Guadalajara, Mexico back in 2010 and haven't stopped touring since. It all started with the idea of mixing its members' whirlwind of eclectic taste in music in a project that was fun, fresh and straight up party inducing. One side of the band is perhaps the most representative aspect: the folklore of mexican popular rhythms such as cumbia and norteño, along with the outfits and special kind of clever and colorful speech that goes with it. On the other hand there is the influence of foreign genres such as electronic music, rock and hip hop. The combination of it all spawns styles coined by the band as 'Cumbiatrónico' (cumbia + electronic) and 'Sabrosindie' (sabroso, spanish word for "tasty" + indie). The group's live shows are full of dance and celebration with a very special feel. You can hear cover songs that take the audience by surprise. Versions turned to cumbia of bands such as Kings of Leon, Radiohead, No Doubt and Daft Punk, but completely adapted to the folksy, playful kind of spanish that represents a big part of mexican culture. They also play unique interpretations of spanish speaking bands such as Los Teen Tops, Joan Sebastian, Jeans and Los Huracanes del Norte. Los Master Plus do not limit themselves to cover songs, their self produced tracks such as 'La Cumbia del Pero', 'La Ultima Coca del Desierto' and 'Mamarazzi' are also sang and danced cheerfully by their audience. 'El Comanche' and 'Larry Mon', the two members of the band, keep the crowd interactively entertained and make every presentation an unforgettable experience, a completely fun show where it's almost impossible not to dance. 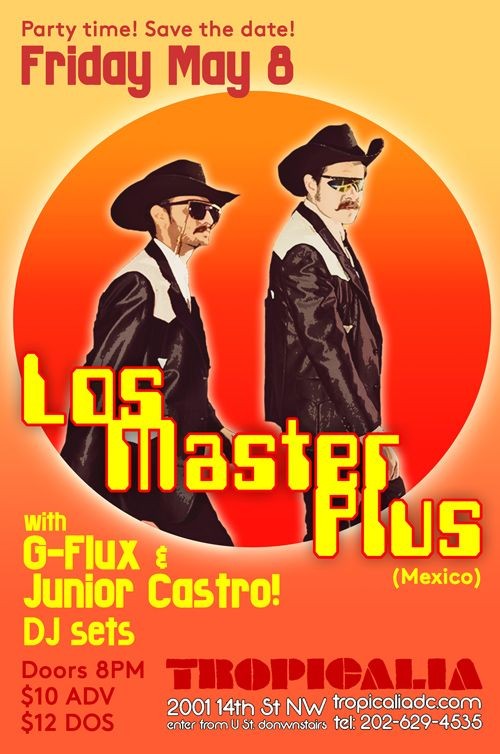